11 Ago Out of Sight: Behind What We Eat

When you think of the globalized economy, you might not think of food. But capital mobility and the legal framework facilitating it have tremendously shaped the food system. It has transformed where and how our food is produced, who grows it, and how it affects the ecosystem.

NAFTA’s agricultural provisions allowed American farmers to dump their products on the Mexican market while raising animals fed on cheap American corn. This transformed Mexico. Mexican pig farmers went out of business because pork prices dropped so low. In 1995 Mexico imported 30,000 tons of pork from the United States, and in 2010 it imported 811,000 tons. Mexican hog farmers had to leave their farms to make a living. Some migrated north, becoming undocumented immigrants in the United States. A group of those people found work in a Smithfield Foods processing plant in North Carolina. Smithfield used these immigrants to bust a union-organizing campaign in the plant. When some of those immigrants in turn joined the union, Smithfield called the Immigration and Naturalization Service to report itself for immigration violations.

Many of the Mexican workers in North Carolina came from the state of Veracruz, on the Gulf Coast. Those who stayed behind in Veracruz also found themselves fighting Smithfield. NAFTA rules facilitating land privatization allowed American agricultural companies to create U.S.-style agribusiness operations in Mexico. Smithfield built a pork-processing facility in Veracruz, and it treated the people who lived around that facility as poorly as the workers in North Carolina. The company buried dead pigs in unlined pits. When those pigs decomposed, they contaminated the local water supply. Local residents organized to stop Smithfield from expanding the new facility and won.

Corporations do not care about national borders so long as they can accomplish their objectives. Whether the slaughterhouse is in North Carolina or Veracruz, most of us never see where our food comes from. When it makes sense to invest in Mexico, agribusinesses do so. But they can also move to the vast Great Plains or the South, where environmental regulations are few and labor unions weak. As Timothy Pachirat writes in his powerful firsthand account of working in a Nebraska slaughterhouse, “Distance and concealment operate as mechanisms of power in modern society.” Hiding food production protects companies by concealing how the industry treats animals, what it dumps into the ecosystem, and how it treats workers. Today’s consumers might eat organic food, but that does not mean the food is produced in a way that contributes to social justice. It does not mean that the people growing the food, butchering the meat, or serving you in the restaurant are treated humanely. Peeling off the food industry’s concealing blindfolds can empower consumers to again fight for labor and nature.

We once knew more about who raised our meat and how it was processed. Until after the Civil War, most Americans lived on farms or in small towns. Food production was largely local, supplemented by larger national and international markets for foods like sugar and coffee. Meat was especially local. People wanted to see the meat they bought, particularly their beef. Given that fresh beef goes bad quickly, consumers did not trust anything that was not butchered locally. Until the late nineteenth century, people raised their own animals, bought meat from nearby farmers, or went to butchers who knew where the animal came from. Even big cities like Boston and New York had slaughterhouses to provide freshly slaughtered beef.

When American cities exploded in size after 1880, local food production became harder. A city of a million people could not easily grow its own food or slaughter its own meat. The advent of refrigerated railcars in the 1880s turned meat into an industrial product and played a major role in separating the production of food from everyday lives. Refrigeration meant that meatpackers could precut beef and send it across the country without concern about spoilage. To overcome people’s concerns about its quality, the companies took a loss in selling their meat, undermining local butchers and creating new markets for cheap meat that would generate profit after the smaller competitors shut down. Millions of cows that grazed on the Great Plains rode trains to Chicago where they went into huge stockyard pens. They were killed in enormous slaughterhouses, processed into a variety of products, and then shipped by train to consumers across the country. By the early twentieth century, beef was not from a cow but from a package you bought at a local market. Once Americans became used to refrigerated or canned beef, they assumed it was good meat. That assumption was often mistaken.

The gargantuan meatpacking district of Chicago achieved fame and became an international tourist attraction. But, as Upton Sinclair described in his famous 1906 novel The Jungle, these factories created treacherous work conditions and nasty food. Slaughterhouse workers stood on floors soaked in blood and water in very cold temperatures, with flying hooks and knives risking their limbs and lives every second. They began forming unions in the 1890s to improve their lives, but it was not until the creation of the CIO-affiliated Packinghouse Workers Organizing Committee (later the United Packinghouse Workers of America or UPWA) in 1937 that they achieved major gains in pay and working conditions. Organized labor increasingly played a big role throughout the nation’s food economy after the 1930s. UPWA members cut beef in Chicago. The milkmen delivering glass jars of fresh milk to doorsteps were Teamsters. By the 1960s, unionized meat cutters made 28 percent more money than average workers made for nondurable manufacturing.

States such as Louisiana promote themselves as “business friendly,” attracting corporations with the unstated promise that companies like C.J.’s can operate with little state interference. Increasingly, though, companies like Walmart want to avoid even the possible threat of a reduction in supply through regulations. Shellfish production has moved decisively overseas over the past two decades. More than 80 percent of shrimp eaten in the United States comes from other nations, with Bangladesh, Vietnam, and China increasingly providing Americans with their inexpensive shellfish. Those governments do not enforce labor laws in fish-processing sites. Immigrant workers in a shrimp factory in Thailand’s Songkhla Province that supplies Walmart went on strike in 2012. They struck over their filthy barracks and a reduced food allowance that left them starving. The Cambodian and Burmese workers cannot read Thai, are in debt to traffickers for their expenses in getting to Thailand, and have little recourse to improve their lives. Walmart originally claimed it had told the Songkhla supplier this behavior violated its labor codes, but it later denied ever having received products from that factory, despite overwhelming physical evidence to the contrary. Thai police fired gunshots in the air to break up the strikers, demonstrating that the government’s interest was in protecting the fish elite and foreign contracts, not ensuring basic human rights. The new government in Thailand, following the 2014 coup, is even worse in its contempt for workers and the poor.

But food movements also need to be justice movements and connect to bigger issues. If we are serious in thinking about a democratic food system, we have to support good working conditions throughout the food industry. It means we need to support farmworker and meatpacker unions. We have to end the tipped minimum wage and demand greater funding for OSHA and the FDA to inspect our food factories. 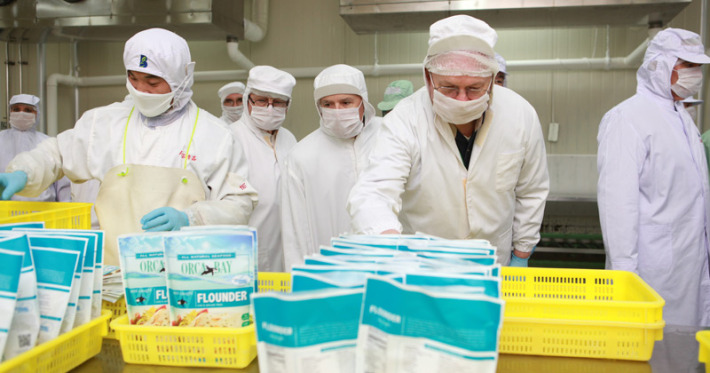 Ultimately, our food problems stem from the same lack of democracy that plagues our society. In our food system, animals are abused, workers die, waterways become polluted with animal waste, and wildlife dies. Yet most of us have no idea this is happening. If we can demand ethically produced food that allows consumers insight into food production, we can go far to reshape the world into a more just and sustainable place. Food corporations, from Monsanto to McDonald’s, hope this never happens.