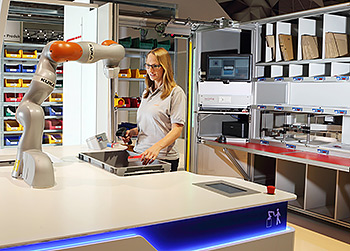 01 Mag KUKA demostrates Industrie 4.0 is not simply a trendy buzzword

KUKA demostrates Industrie 4.0 is not simply a trendy buzzword 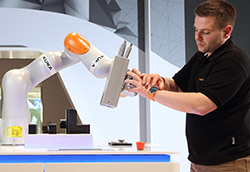 KUKA demostrates Industrie 4.0 is not simply a trendy buzzword. At its trade fair booth, KUKA is showing how human-robot collaboration (HRC), mobile systems and open communication standards are opening the door to the flexible and adaptive production of the future.

Flexibility is the main driver of Industrie 4.0. Flexible time planning, flexible resources, flexible products, flexible manufacturing facilities are the basic preconditions. KUKA innovations and developments consistently follow the core concept of simple integration. With the LBR iiwa lightweight robot and its Java-based Sunrise controller, which are at the center of this year’s booth, KUKA is now taking a step further, offering products that are ready for Industrie 4.0. They form the core of the numerous industrial applications showcasing the focal topics of human-robot collaboration, mobility and smart platforms.

Industrie 4.0 stands for the networking of the real world of manufacturing with the virtual world. It is all about the interoperability of systems, and this is precisely where the strengths of KUKA lie. At Hannover Messe, KUKA is demonstrating that it is already directing its attention to the future. This also involves opening up new markets. The acquisition of the Swiss logistics company Swisslog and the establishment of KUKA Industries are tapping new potential for KUKA.