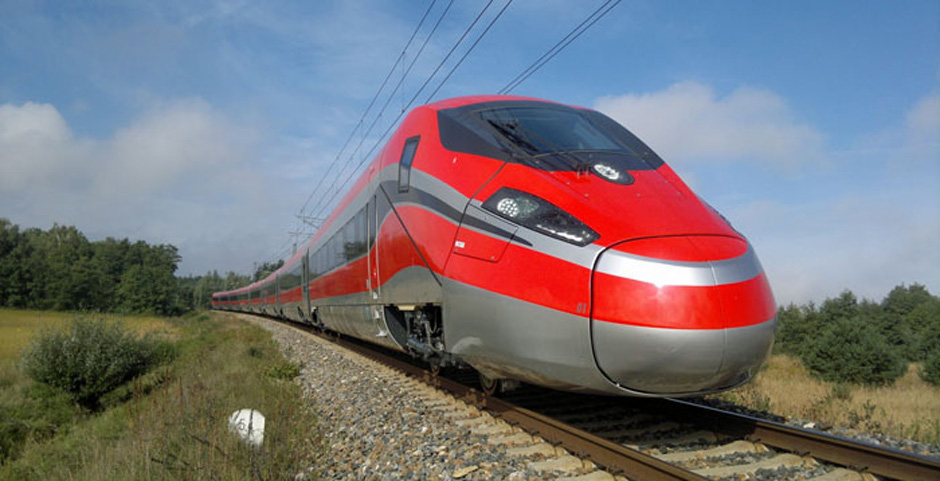 As swift as an arrow: Recently, on a test rail track, a Frecciarossa train reached a speed record of almost 394 km/h. This record-breaking feat was made possible by – amongst other things – specially strengthened catenary wires from Alpiq EnerTrans S.p.A. The high-speed rail network in Italy is a success story – not least thanks to Alpiq.

The Frecciarossa 1000 is the pride of Trenitalia. The first Frecciarossa 1000 trains, which are also known as the ETR 1000 class, have been in operation on Italy’s high-speed network since June 2015 and have been performing day-to-day rail service at up to 360 km/h. The Bombardier/AnsaldoBreda super-trains were actually designed for speeds of up to 400 km/h. A few weeks ago, this top speed was almost achieved. 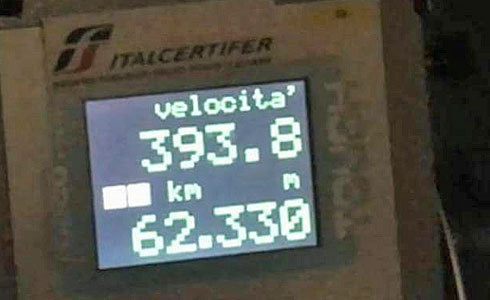 Record-breaking speed with the Frecciarossa 1000 on a February night

The record attempt took place during the night from 25 to 26 February 2016: The speedometer in the driver’s cab of the test train displayed “Velocità: 393.8” – an Italian record! The record was set on the newly constructed stretch of track between Milan and Turin. The catenary wires on this rail link were designed by Alpiq EnerTrans S.p.A.

Alpiq EnerTrans S.p.A., a specialist for railway technology and public transport with headquarters in Milan, was and still is closely involved in the development of Italy’s high-speed rail network: Within the framework of the Saturno Consortium, Alpiq EnerTrans S.p.A. is a technology partner and responsible for the planning and realisation of over 600 km of catenary wires and the associated supply systems.

Higher speeds thanks to new catenary wires from Alpiq

In order to boost long-distance public transport between Italy’s major cities and make the “freccie” (arrows) even more competitive, Rete Ferroviaria Italiana also initiated a project aimed at increasing the maximum speeds on the existing express rail lines. The goal is to increase the maximum speed from 300 to 360 km/h on the 25 kV AC lines (Turin–Milan, Milan–Bologna, Bologna–Florence and Rome–Naples) and from 250 to 300 km/h on the oldest stretch of track between Florence to Rome (3 kV DC).

Alpiq EnerTrans S.p.A played a crucial role in the development of the technical measures for the existing catenary wires that must be implemented in order to ensure they are capable of handling 360 km/h. The project focused on the 57 km section between Turin and Milan on which the test runs for the approval of trains – for example for the new Frecciarossa 1000 from Trenitalia – are carried out.

The development of the concept, the project planning and the associated studies were carried out in collaboration with Rete Ferroviaria Italiana and the Department of Mechanical Engineering at the Polytechnic University of Milan within the framework of the Joint Research Centre (JRC). Within this organisation, which is integrated in the Politecnico, Alpiq EnerTrans S.p.A. is the industry partner responsible for technology and the overhead contact line system.

No train traffic disruptions, thanks to night work on the test stretch of track

In addition to an increase in speed, Rete Ferroviaria Italiana also requested improvement of the performance of the catenary wires. The goal of this is to reduce maintenance costs.

In its studies, the JRC working group found that – if the tension of the bearer wire remains at 16.25 kN – the tension of the contact line must be increased from 20 kN to 30 kN, in order to enable speeds of 360 km/h. Because this measure only affects the contact line, it offers an unbeatable advantage: all the other components (span, bearer wire and suspender) do not require modification. However, in order to absorb the increased mechanical tension, the material of the contact line has to be modified: Following a number of simulations of the dynamic interactions between the pantograph and the contact line, a magnesium-copper wire was used (instead of the electrolytic copper wire that was previously in use).

Alpiq EnerTrans S.p.A. started implementing the defined changes on the test stretch of track in March 2013. The construction work was organised in such a manner as to prevent any disruptions to railway operations: During five nights per week, the assembly technicians worked from 10 p.m. to 4 a.m., which allowed the line to be reopened again in time for the first morning trains between Milan and Turin to pass.

In a next step, the new catenary wires will be certified for operating speeds of up to 360 km/h – it is expected that the certification will be granted shortly. But one thing is already clear now: The Italian speed record with the new Frecciarossa 1000 was made possible also thanks to the advanced and efficient solution from Alpiq EnerTrans S.p.A. A milestone for public transport in Italy.