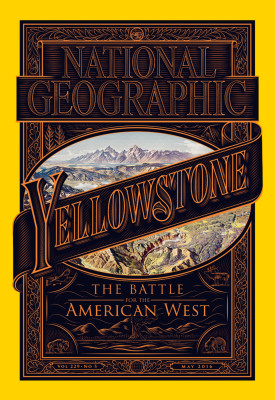 Posted at 08:09h in Online, Printed by admin 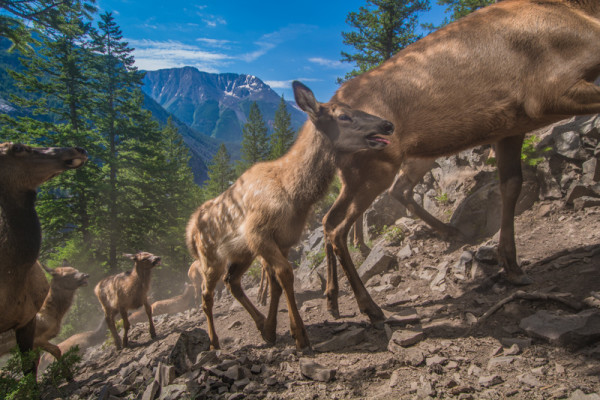 Elk migrating towards Yellowstone National Park in late June (6/30/2015 10:10:10AM). This specific location is in the Shoshone National Forest in western Wyoming. These elk winter on private ranchlands far from Yellowstone, but migrate over the mountains to Yellowstone National Park for the summer, park boundaries create significant issues for wildlife like these elk, which are being highlighted during the 100yr anniversary of the National Park Service in 2016. This photo was made with a motion triggered camera trap, the elk did not know that they were being photographed.

WASHINGTON (April 14, 2016)—As part of National Geographic’s year-long celebration of the National Park Service’s centennial, the National Geographic Museum will open the exhibition “Invisible Boundaries : Exploring Yellowstone’s Great Animal Migrations” on April 15. The exhibition features stunning photographs, immersive video, interactive migration maps, cultural objects and artwork by James Prosek that explore the compelling story behind some of the most amazing animal migrations on the planet.

The Greater Yellowstone Ecosystem, an area 10 times larger than Yellowstone National Park itself, is divided among federal, state, private and tribal lands, and is in the path of some of the most significant wildlife migration routes on the planet. Many of these lands have conflicting interests and are unprotected, creating major challenges for migratory animals as they leave Yellowstone National Park boundaries. The long-term conservation of these animals depends on the actions of landowners and other stakeholders far beyond the national park’s borders.

The “Invisible Boundaries ” exhibition features the work of National Geographic Explorer and wildlife ecologist Arthur Middleton and National Geographic Explorer and photographer Joe Riis. Two years ago, the pair teamed up to document the elk migrations of Greater Yellowstone, hoping to raise awareness of the issues that arise when humans impose boundaries on nature and to form a coalition to solve these conservation challenges. Middleton and Riis are the recipients of the 2013 Camp Monaco Prize by Prince Albert II of Monaco and were nominated for the 2016 National Geographic Adventurer of the Year Award.

“Invisible Boundaries is an example of the unique contribution and impact National Geographic is making on conservation efforts,” said Kathryn Keane, vice president of National Geographic Exhibitions. “We have brought together some of the foremost experts on ecology, conservation management and wildlife photography to showcase a pressing issue facing one of America’s most beloved national parks and to inspire action to preserve it.”

In addition to the “Invisible Boundaries ” exhibition, Riis and Middleton are working on a documentary film titled “Elk River.” Riis’ photos appear in the June 2016 issue of National Geographic magazine, a single-subject issue about Yellowstone National Park.

The National Geographic Museum exhibition is organized in partnership with The Buffalo Bill Center of the West in Cody, Wyoming, and its Draper Natural History Museum and Whitney Western Art Museum. Other partners include Yale University’s School of Forestry and Environmental Studies, the Yale Institute for Biospheric Studies, the Wyoming Migration Initiative of the University of Wyoming and exhibition designer Split Rock Studios.

About the National Geographic Society
National Geographic is a global nonprofit membership organization driven by a passionate belief in the power of science, exploration and storytelling to change the world. It funds hundreds of research and conservation projects around the globe each year. With the support of its members and donors, the Society works to inspire, illuminate and teach through scientific expeditions, award-winning journalism, education initiatives and more. For more information, visit www.nationalgeographic.org.